Sir Sandford Fleming
The creation of the time zones is much more recent than thought. At the end of the XIX century a huge number of standard times existed, almost one for each great city, the need for standardization seemed obvious. For this reason, in 1870 a Canadian railroads engineer, Sir Sandford Fleming, designed a plan to institute a standard time zone system.

Following his initiative, in 1884 delegates from 27 countries met at the Conference of the Meridian in Washington, and adopted a global time system that is the one that is used nowadays. This system splits the world into 24 zones or time zones, each of these regions has approximately 15 degrees of length, the zero meridian, is the reference for the rest of zones. It is an imaginary line that goes from the north to the south pole through Greenwich (United Kingdom).

Each time zone that goes to the east from Greenwich adds one hour and one hour is subtracted if we move to the west.

However, there are several exceptions to this rule as most of the biggest countries have fewer time zones than they should. China constitutes a remarkable example, as it uses the same time zone in its whole territory. The time named by the Greenwich time zone is called Greenwich Mean Time (GMT). 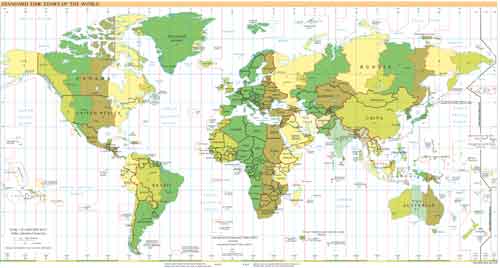 Lately the GMT denomination is being replaced by UTC (Universal Time Coordinated). In this case, the calculation of the time is based on the use of atomic clocks, instead of stars observation (as it happened in GMT).

× Cookies help us deliver our services. By using our services, you agree to our use of cookies. Learn more.