The time in science

The concept that science has about the time has evolved several times throughout history. We can say that the first great theory is the one that is usually called classical physics and that Isaac Newton proposed in his book Philosophiae Naturalis Principia Mathematica. Newton thought that the time determines the relationship between the speed and the distance that an object travels. The following formula may be well known by all of us: 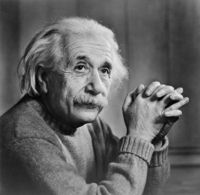 Albert Einstein
According to this concept, the time is an absolute magnitude, that means that the time a trip takes does not change depending on the measuring observer. At the beginning of the last century, an employee of the Swiss' patents office, Albert Einstein, until then anonymous, published an article that would completely change our vision of the world. One of the most important conclusions of his theories was that the time is not absolute, but relative and depending on the observer. What Einstein exposed in his theory of relativity is that a universal constant exists that is the speed of the light. This has some interesting implications, one of them is that the concepts of space and time change compared to Newton's theories. Newton thought that space was not an absolute magnitude, and depended on the observer, but the time was.

Special relativity did not seem consistent with Newton's theory of the gravitation. This problem challenged Einstein for some years, until 1915 when he reconciled both theories in his general relativity theory. In this Einstein explained that space and time are intimately bound and gravity has a direct influence on the time. One of the conclusions of this theory shows us that the parabolic movement of the planets is equivalent to a rectilinear movement in the half-framed space-time, the planets follow what is called a geodesic one.

Following this reasoning we can conclude that time goes by slower the closer to a massive object we are. It is possible to empirically verify that it exists a difference between a clock located on the surface of the earth level and one that is far from it. This effect has consequences in the GPS systems, for example, the clocks on the satellites are faster than the ones located on the surface of the earth, and the difference is the one that Einstein theory predicts.

× Cookies help us deliver our services. By using our services, you agree to our use of cookies. Learn more.